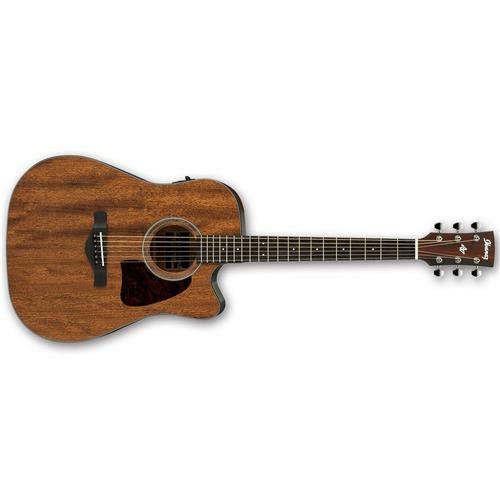 Ibanez created the Artwood Series to be an ode to their rich tradition of acoustic guitars while adding the modern accoutrements needed by today's guitarist. The AW54CEOPN is a visual stunner with a solid mahogany top (with mahogany back, sides, and neck) and an open pore natural finish that really shows off the mahogany's beautiful woodgrain. Adding to its aesthetic charm is a black and white multi-rosette, a cutaway that helps you access the entire rosewood fingerboard, a rosewood AW bridge with bone saddle, tortoise pickguard and chrome die-cast Grover tuners. The mahogany construction provides you with plenty of warmth naturally, but when you need to plug in, the AW54CEOPN has a Fishman Sonicore pickup and Ibanez's AEQ210TF preamp that features a simple 2-band control, which makes adjusting the sound easy while providing plenty of bottom. It also has a phase switch for reducing feedback and user-friendly onboard tuner. 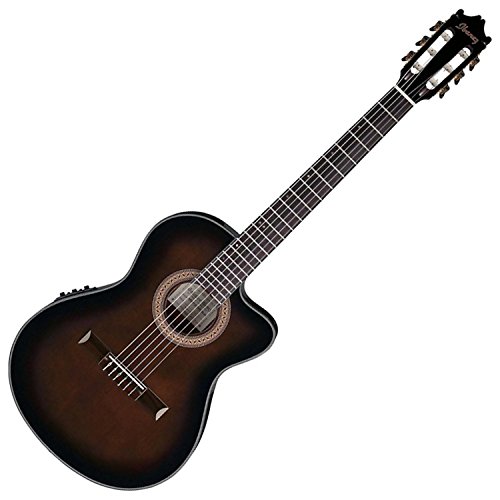 Slightly smaller and far more slender than a typical acoustic, Ibanez's GA35TCE thinline nylon-string acoustic-electric guitar is a comfortable fit for anyone from flatpickers to finger stylists alike. To give the GA35TCE a clear voice that suits blues and country, rock and pop equally well, Ibanez built this workhorse acoustic guitar with a back and sides made from mahogany. A solid spruce top balances out the GA35TCE's deep and rich low end with an even balance of midrange clarity and high-end sparkle. And to top it all off, you're even ready to take the stage thanks to the GA35TCE's Fishman pickups and AEQ210T preamp/tuner system. The combination Ibanez chose, a spruce top on a mahogany back and sides, has been a favorite among songwriters and live performers since the beginning of modern American music. Together, these tonewoods give the GA35TCE acoustic-electric guitar warm and present lows and clearly defined highs, leaving plenty of space in the midrange for your vocals. Whether you're the humblest of Saturday afternoon porch pickers or the seasoned pro who's been hauled from show to show a time or two, this Ibanez GA35TCE acoustic-electric nylon-string guitar was made for you. Everyone needs an inexpensive acoustic guitar you can pack up, head out, and run off with anytime you need, without worrying about damaging any priceless instruments. But your "beater" guitar doesn't need to sound bad, and the Ibanez GA35TCE is more than proof enough of that. In fact, its natural acoustic sound makes it a great campfire guitar, but it's small enough to be your new favorite couch guitar as well. The built-in AEQ210T preamp (complete with XLR out!) sounds great plugged in, so you'll most likely find yourself holding your new favorite stage guitar too when you take your GA35TCE acoustic-electric on stage! 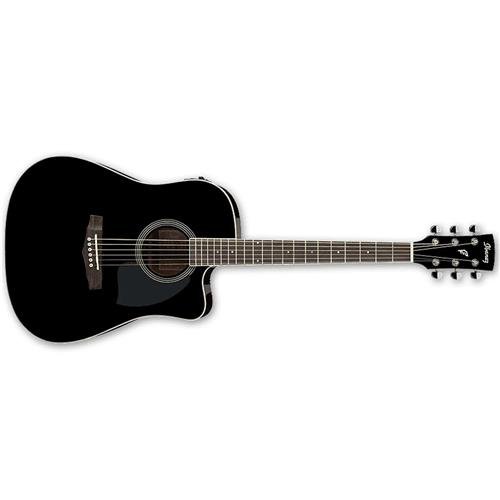 Mahogany back and sides provide rich, warm lows and sweet sustain Ibanez Under Saddle pickup and AEQ-2T preamp maintain the guitar's natural tone when plugged in Gloss black finish and chrome die-cast tuners give guitar distinguished appearance Includes an onboard tuner Get professional features, quality, and great sound at extremely inexpensive price Advantage bridge pins are easier to take out and put in than standard pins Special bulb-shaped end makes pin easy to grip and prevents it from being pushed in too far With Advantage, the pin and string stay put 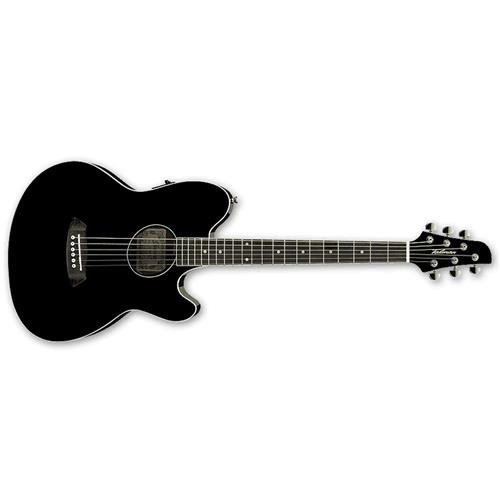 Perfect for electric players seeking the rich tones of an acoustic without sacrrificing the comfort and playability of an electric. The bridge pickup combines with the spruce top and fully bound mahogany body to produce warm and articulate tone. Ibanez's double-cutaway Talman TCY10 is perfect for the electric guitarist who wants to gain the full tones of an acoustic guitar without losing the comfort and playability of an electric. This Ibanez guitar features the clarity of a bridge pickup combined with a spruce top and mahogany back and sides. Case sold separately. Check the drop-down menu to the right to select colors and/or other options. 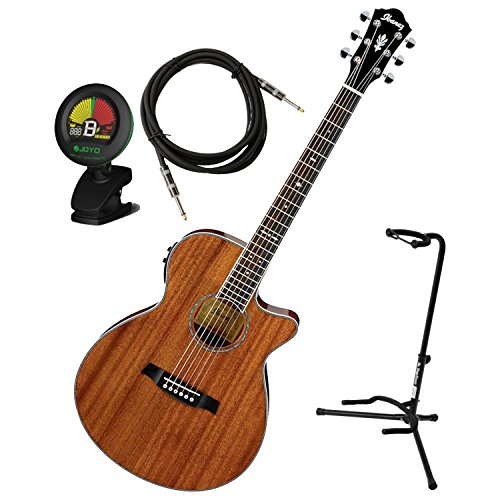 The AEG Series' slender, single-cutaway bodies deliver powerful and balanced acoustic sound, unplugged or through an amp or PA system. These guitars combine easy playability, classic solid and sunburst finishes and mahogany bodies with spruce tops to create a quality, workhorse acoustic guitar that will rise to any occasion. High quality Fishman Sonicore pickups and Ibanez preamps with onboard tuners provide the sparkling tones that sound great in any venue. 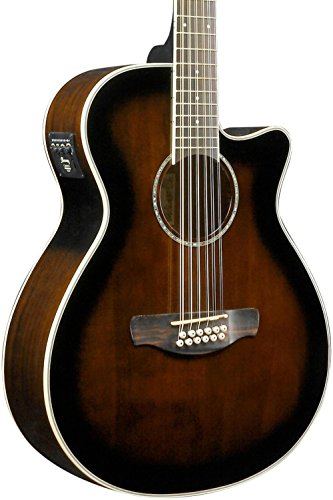 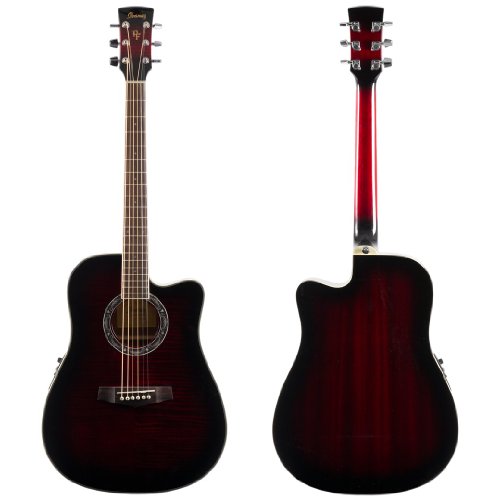 Performance Series PF28ECE Acoustic-Electric Guitar. With the Ibanez PF28ECE Performance acoustic-electric guitar, you get professional features, quality and great sound at an affordable price backed by the Ibanez name and limited lifetime warranty. The mahogany back and sides give a textured tone while the flamed maple top projects cleanly. Ivorex II nut is stronger and more durable than bone and even harder than the original Ivorex. Ivorex II nut allows brilliant highs and more pronounced lows with less mid-range, which makes Ivorex II-fitted guitars perfect for amplification. Ivorex II saddles are specially formulated to provide ultra-fast response and maximum sound transfer to the body. In addition to the 1/4" output jack, a balanced XLR jack is included for direct connection to the PA system. The Ibanez SST Shape Shifter preamp with onboard tuner enables easy sonic manipulation, using the 3-band EQ and tone shaper. Any contour is right at your fingertips. The SST also offers a phase reverse for feedback reduction. Case sold separately. 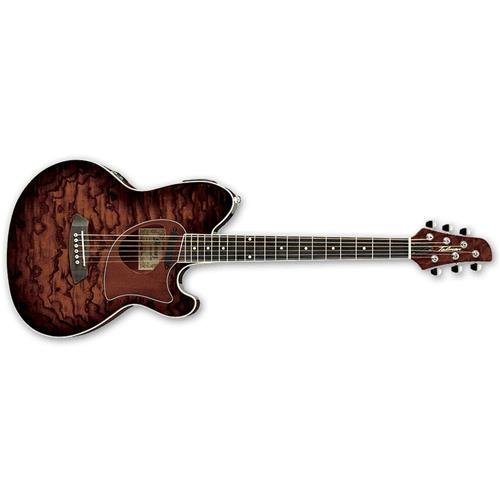 Bright acoustic resonance with electric looks and feel. Talmans are for the electric guitarist who likes being on stage with an instrument that has the bright resonance of an acoustic and the streamlined look and feel of an electric.