Need a stylish way to store and refrigerate beverages for hosting and everyday use? Sleek in design and state-of-the-art in performance, the Evolution Series Wine & Beverage Center by Wine Enthusiast is sure to bring your home bar or game room to a whole new level. This fridge offers the top-quality wine storing compressor technology of a larger more expensive wine cooler, without the noise and energy consumption. Get your beverages as cold as possible without fear of them freezing and bursting. Easily set the temperature with the digital touchscreen thermostat panel while the double paned glass door provides thermal insulation. This beverage refrigerator has more than enough space to accommodate your favorite wines, beers, sodas or water. The generous capacity of 4 cubic feet allows you to refrigerate up to 90 12oz cans of your favorite beers or sodas, and conveniently includes 2 Shelves and a Basket for oversized bottles. The compact beverage center measures: 25.5" Height x 17" Wide x 18.75" Deep. 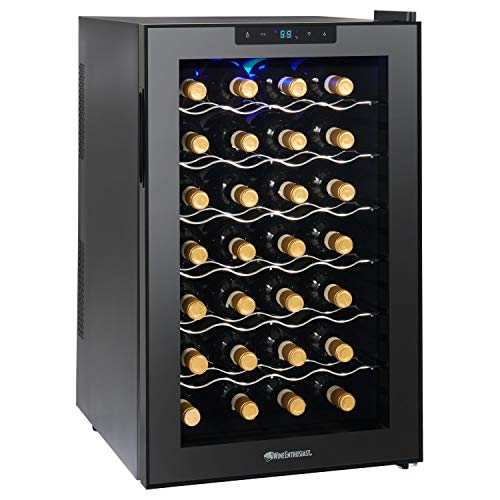 Need a stylish way to store and refrigerate beverages for hosting and everyday use? Sleek in design and state-of-the-art in performance, the Freestanding 28 Bottle Silent Touchscreen Wine Refrigerator by Wine Enthusiast is sure to bring your home bar or game room to a whole new level. This fridge offers the top-quality wine storing compressor technology without the noise and energy consumption. Get your beverages as cold as possible without fear of them freezing and bursting. Easily set the temperature with the digital touchscreen thermostat panel while the double paned glass door provides thermal insulation. The generous capacity allows you to refrigerate up to 28 bottles of your favorite wines and conveniently includes 6 pull-out shelves, the top shelf accommodates oversized bottles. The freestanding wine cellar measures: 29.5" H x 17.75" W x 21" D. 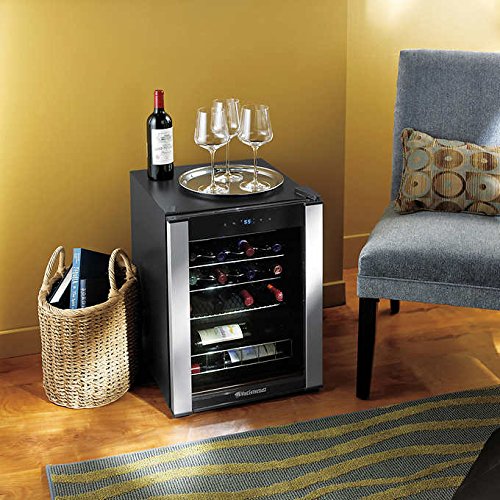 Introducing our newest series of compact cellars for small collections and large discerning tastes. Sleek in design and state-of-the-art in performance, our Evolution Series showcases and protects your investments with top-quality wine storing compressor technology scaled down to compact size. Whether you need to lay down a few bottles or store wine at the proper service temperature, this Series is an affordable form-and-function solution, offering the features of larger, more expensive refrigerators in convenient space-saving sizes. 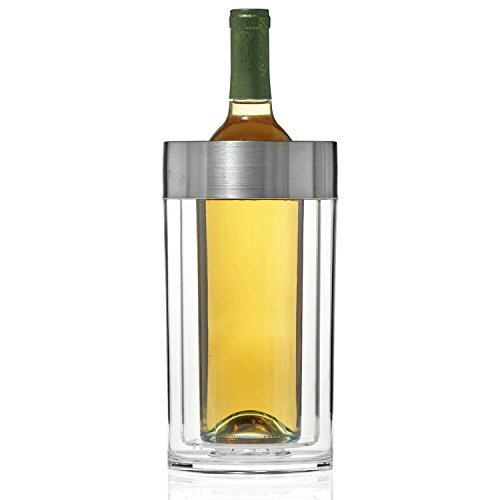 Looking for a way to keep your wine bottle chilled without having to worry about melting ice? The Double Walled Iceless Chiller by Wine Enthusiast features a thermal insulated design that keeps wine cold without the mess and hassle of traditional ice buckets. A modern twist on the classic wine bottle bucket cooler, the transparent BPA-free acrylic construction allows you to easily read the bottle's label without having to pull it out.Simply place your pre-chilled wine in the wine cooler and enjoy 3 hours of cold wine or champagne. There's no need to put your wine chiller in the freezer beforehand or have to worry about messy condensation. The clean minimal design of the tabletop wine cooler has a contrasting stainless steel accent rim that blends in seamlessly with any home decor. It is elegant enough for formal events yet useful for everyday use. The wine cooler bucket can be used with almost any sized bottle of red wine, white wine, or champagne. Measures 9" high x 4.75" diameter. Hand wash only. 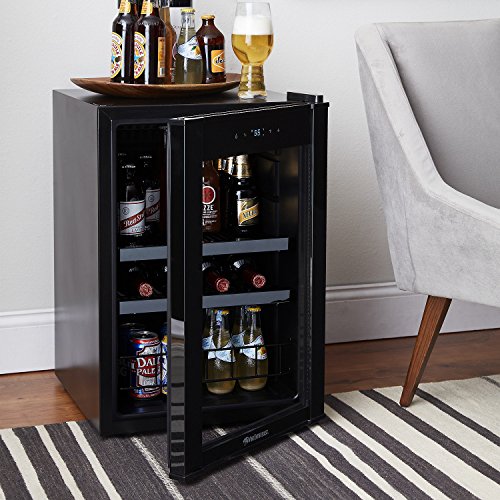 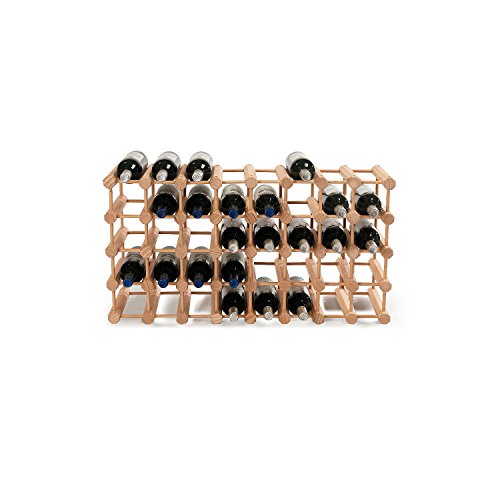 New and Improved--Stronger in Mahogany! Sourced from the finest sustainable tree plantations in Indonesia our Modular 40 Bottle Wine Rack is now more durable more beautiful and more eco-friendly than ever before. Hand-cut and hand-sanded allowing for even coloring and grain and less dark markings. A strong quality wine rack that is expandable on all four sides and extremely versatile. Complete with wood dowels and pegs for fast assembly vertically horizontally or on an angle...the choice is yours. Complete kit holds 40 bottles and can fit champagne bottles. Size: 11'D For measuring purposes: Multiply 4' by the number of openings across or vertically and add 1-3/8' to the total of each. 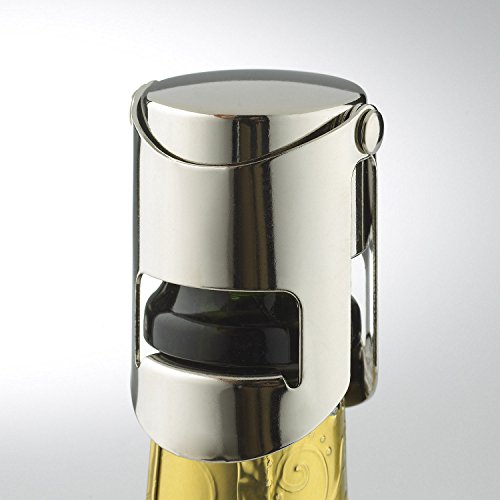 Champagne Recorker. Preserve your champagne or sparkling wine for days. Just slip this chrome-plated resealer over the bottle between toasts to keep in all your bubbles. 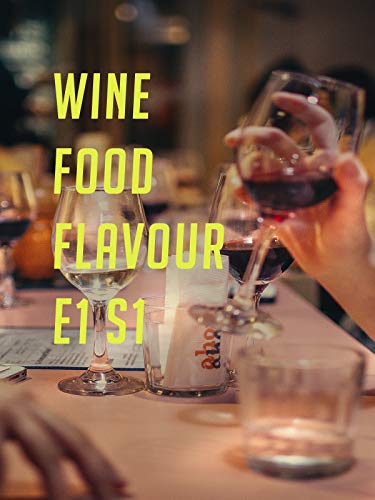 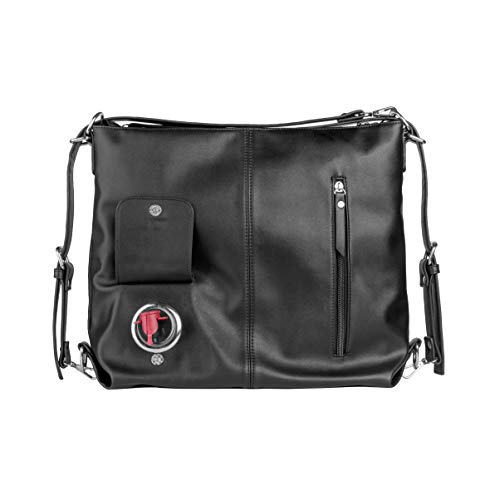 Your Best Kept Secret Are you looking for an easy and fashionable way to store wine, alcohol or other beverages so you can enjoy drinking at all sorts of events? Lush Lyfe’s 2-in-1 convertible purse has you covered for your favorite concerts, beach trips, cruises, parades, tailgates and parties! Fill your reusable drink bladders with up to 3 full liters of liquid and enjoy a refreshing drink even when you’re not supposed to! Even events where you are allowed to drink…the prices are so outrageous your bag will pay for itself with its very first use! Drip Guard Spout We include a sturdy plastic spout with built in drip guard. Avoid wine stains and spills that often result from leaky spouts. Secure Snap Spout Flap A metal snap secures the spout flap when you aren’t using it. The flap just looks like an innocent purse pocket, but in reality, it keeps your secret spout safe and secure. 100% Usable Purse This awesome purse bag and backpack isn’t just an awesome vehicle for your favorite drinks. It works just like a real purse with multiple zippered pockets and a large open compartment so you can store everything you need without carrying multiple bags or wallets. Dimensions: 12” tall (30 cm) 15” Upper Opening (39 cm) 5” Deep (14 cm) Join thousands of happy wine lovers Click Add-to-Cart to order your black convertible wine purse bag Today! 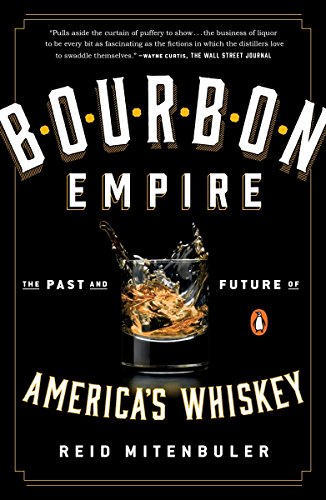 Bourbon Empire: The Past and Future of America's Whiskey

Bourbon Empire: The Past and Future of America's Whiskey

“Pulls aside the curtain of puffery to show . . . the business of liquor to be every bit as fascinating as the fictions in which the distillers love to swaddle themselves.” —Wayne Curtis, The Wall Street Journal   Walk into a well-stocked liquor store and you’ll see countless whiskey brands, each boasting an inspiring story of independence and heritage. And yet, more than 95% of the nation’s whiskey comes from a small handful of giant companies with links to organized crime, political controversy, and a colorful history that is far different than what appears on modern labels. In Bourbon Empire, Reid Mitenbuler shows how bourbon, America’s most iconic style of whiskey, and the industry surrounding it, really came to be—a saga of shrewd capitalism as well as dedicated craftsmanship.   Mitenbuler traces the big names—Jim Beam, Maker’s Mark, Evan Williams, and more—back to their origins, exploring bourbon’s founding myths and great successes against the backdrop of America’s economic history. Illusion is separated from reality in a tale reaching back to the Whiskey Rebellion of 1794, when the ideologies of Thomas Jefferson and Alexander Hamilton battled to define the soul of American business. That debate continues today, punctuated along the way by Prohibition-era bootleggers, the liquor-fueled origins of NASCAR, intense consolidation driven by savvy lobbying, and a Madison Avenue plot to release five thousand parrots—trained to screech the name of a popular brand—into the nation’s bars.   Today, the whiskey business takes a new turn as a nascent craft distilling movement offers the potential to revolutionize the industry once again. But, as Mitenbuler shows, many take advantage of this excitement while employing questionable business practices, either by masquerading whiskey made elsewhere as their own or by shortcutting the proven production standards that made many historic brands great to begin with.   A tale of innovation, succes... [Read More]