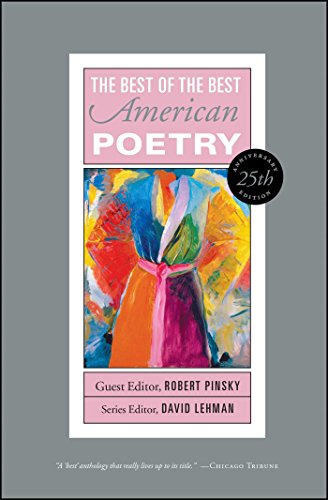 Robert Pinsky, distinguished poet and man of letters, selects the top 100 poems from twenty-five years of The Best American PoetryThis special edition celebrates twenty-five years of the Best American Poetry series, which has become an institution. From its inception in 1988, it has been hotly debated, keenly monitored, ardently advocated (or denounced), and obsessively scrutinized. Each volume consists of seventy-five poems chosen by a major American poet acting as guest editor—from John Ashbery in 1988 to Mark Doty in 2012, with stops along the way for such poets as Charles Simic, A. R. Ammons, Louise Glück, Adrienne Rich, Billy Collins, Heather McHugh, and Kevin Young. Out of the 1,875 poems that have appeared in The Best American Poetry, here are 100 that Robert Pinsky, the distinguished poet and man of letters, has chosen for this milestone edition. 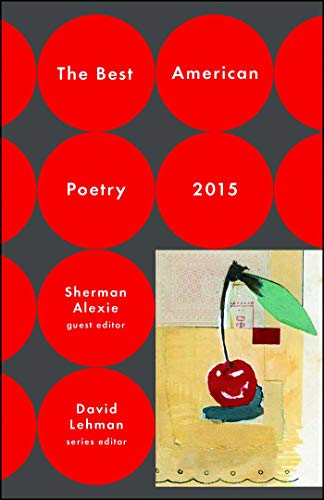 The premier anthology of contemporary American poetry continues with an exceptional volume edited by award-winning novelist and poet Sherman Alexie, now with a new essay by Alexie on reactions to the 2015 publication.Since its debut in 1988, The Best American Poetry has become a mainstay for the direction and spirit of American poetry. Each volume in the series presents the year’s most extraordinary new poems and writers. Guest editor Sherman Alexie’s picks for The Best American Poetry 2015 highlight the depth and breadth of the American experience. Culled from electronic and print journals, the poems showcase some of our leading luminaries—Amy Gerstler, Terrance Hayes, Ron Padgett, Jane Hirshfield—and introduce a number of outstanding younger poets taking their place in the limelight. A leading figure since his breakout poetry collection The Business of Fancydancing in 1992, Sherman Alexie won the National Book Award for his novel The Absolutely True Diary of a Part-Time Indian. He describes himself as “lucky enough to be a full-time writer” and has written short stories, novels, screenplays, and essays—but he is at his core a poet. As always, series editor David Lehman’s foreword assessing the state of the art kicks off the book, followed by an introductory essay in which Alexie discusses his selections. The Best American Poetry 2015 is a guide to who’s who and what’s happening in American poetry today. 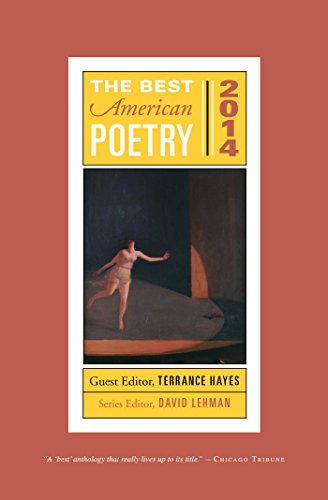 Edited by the National Book Award-winning poet Terrance Hayes, the foremost annual anthology of contemporary American poetry returns: “A ‘best’ anthology that really lives up to its title” (Chicago Tribune).The first book of poetry that Terrance Hayes ever bought was the 1990 edition of The Best American Poetry, edited by Jorie Graham. Hayes was then an undergrad at a small South Carolina college. He has since published four highly honored books of poetry, is a professor of poetry at the University of Pittsburgh, has appeared multiple times in the series, and is one of today’s most decorated poets. His brazen, restless poems capture the diversity of American culture with singular artistry, grappling with facile assumptions about identity and the complex repercussions of race history in this country. Always eagerly anticipated, the 2014 volume of The Best American Poetry begins with David Lehman’s “state-of-the-art” foreword followed by an inspired introduction from Terrance Hayes on his picks for the best American poems of the past year. Following the poems is the apparatus for which the series has won acclaim: notes from the poets about the writing of their poems. 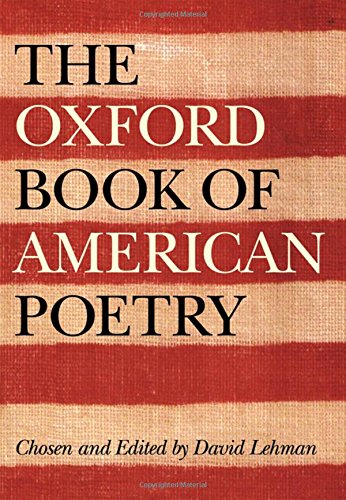 The Oxford Book of American Poetry

The Oxford Book of American Poetry

Here is the eagerly awaited new edition of The Oxford Book of American Poetry brought completely up to date and dramatically expanded by poet David Lehman. It is a rich, capacious volume, featuring the work of more than 200 poets-almost three times as many as the 1976 edition. With a succinct and often witty head note introducing each author, it is certain to become the definitive anthology of American poetry for our time.Lehman has gathered together all the works one would expect to find in a landmark collection of American poetry, from Whitman's Crossing Brooklyn Ferry to Stevens's The Idea of Order at Key West, and from Eliot's The Waste Land to Ashbery's Self-Portrait in a Convex Mirror. But equally important, the editor has significantly expanded the range of the anthology. The book includes not only writers born since the previous edition, but also many fine poets overlooked in earlier editions or little known in the past but highly deserving of attention. The anthology confers legitimacy on the Objectivist poets; the so-called Proletariat poets of the 1930s; famous poets who fell into neglect or were the victims of critical backlash (Edna St. Vincent Millay); poets whose true worth has only become clear with the passing of time (Weldon Kees). Among poets missing from Richard Ellmann's 1976 volume but published here are W. H. Auden, Charles Bukowski, Donald Justice, Carolyn Kizer, Kenneth Koch, Stanley Kunitz, Emma Lazarus, Mina Loy, Howard Moss, Lorine Niedecker, George Oppen, James Schuyler, Elinor Wylie, and Louis Zukosky. Many more women are represented: outstanding poets such as Josephine Jacobsen, Josephine Miles, May Swenson. Numerous African-American poets receive their due, and unexpected figures such as the musicians Bob Dylan, Patti Smith and Robert Johnson have a place in this important work.This stunning collection redefines the great canon of American poetry from its origins in the 17th century right up to the present. It is a must-have anthology... [Read More] 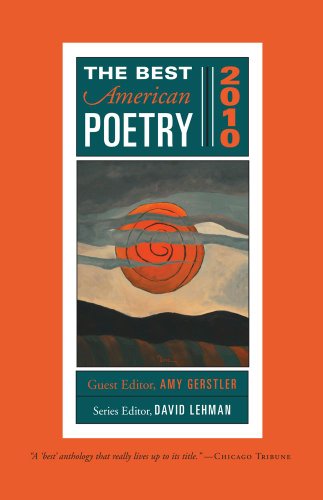 Every year since 1988 a major poet has selected seventy-five poems for publication in The Best American Poetry. The series has quickly grown in both sales and prestige, as poetry itself has seen a remarkable resurgence in popularity and vitality, fueled by established poets at the peak of their powers and a new generation of daring voices. As we approach the millennium, now is the opportune moment to take stock of american poetry and choose the work that will stand the test of time. Harold Bloom, a commanding presence on the American literary state, has read all 750 poems in the series and has picked the "best of the best." He precedes his selections with a compelling and highly provocative essay on the state of American letters, in which he fiercely champions the endangered realm of the aesthetic over the politically correct. Diverse in style, method, and metaphor, the seventy-five poems Bloom has chosen go a long way toward defining a contemporary canon of American poetry. This exciting volume reflects not only the taste of the current editor, but the predilections of the all-star list of poets who have contributed their time and intellect to make this series what is today: a "valuable, invaluable, supervaluable" (Beloit Poetry Journal) record of an ever-changing, always exciting art. 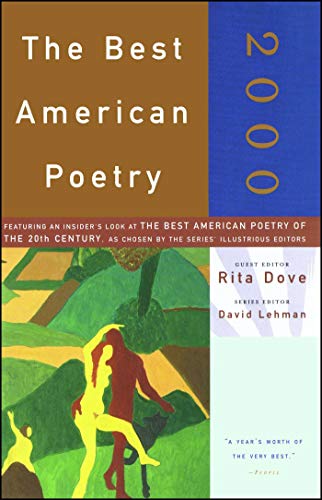 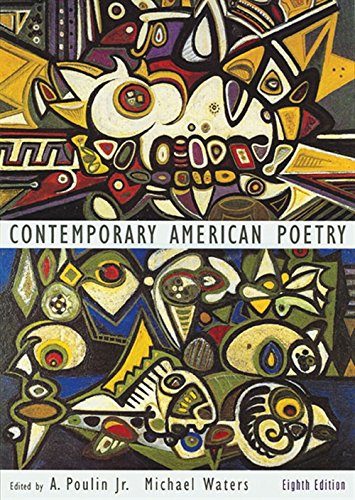 This highly respected anthology presents the works of 70 poets who have shaped the contours and direction of mainstream American poetry from 1960 to the present. Designed to provide a rich reading experience for both undergrad and graduate courses, more than 500 selections illustrate the variety and vitality of American poetry over the last few decades. For each poet, the collection features a generous sampling of their work along with a photo, biographical sketches, and bibliographies. 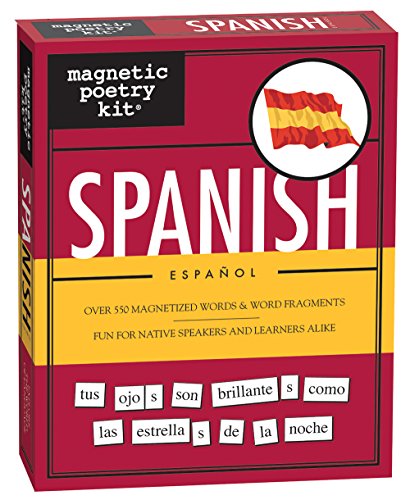 Spanish language poetry kit developed by bilingual fans of Magnetic Poetry. Comes with a mini-translation guide and over 500 magnetic word tiles in a sleek and sexy metal tin. Muy bueno! 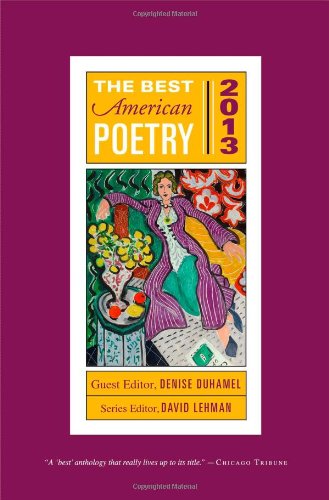 Edited this year by beloved and inventive poet Denise Duhamel, the foremost annual anthology of contemporary American poetry returns.Over the last twenty-five years, the Best American Poetry series has become an annual rite of autumn, eagerly awaited and hotly debated: “an essential purchase” (The Washington Post). This year, guest editor Denise Duhamel brings her wit and enthusiasm and her commitment to poetry in all its wide variety to bear on her choices for The Best American Poetry 2013. These acts of imagination—from known stars and exciting newcomers—testify to the vitality of an art form that continues to endure and flourish, defying dour predictions of its demise, in the digital age. This edition of the most important poetry anthology in the United States opens with David Lehman’s incisive “state of the art” essay and Denise Duhamel’s engagingly candid discussion of the seventy-five poems that made her final cut.